Now, its a little late for this year, but this month's update is birch syrup from birch sap, which runs from early March until mid April but decreases in sweetness and volume at the later end. If you're reading this in 2013 that's a bit of a tease, but don't worry, birch leaves will be out soon and taste great right up until mid summer.

For tapping birch sap you will need, a drill with a 12 mm bit, 12 mm plastic tub, 12 mm dowel and a container, I recommend a demijohn as a good tree will produce roughly a gallon in 24 hours and that's how often you need to empty it to prevent it going off. 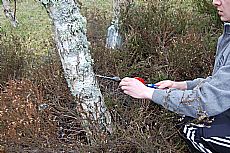 Drill a hole in your chosen tree about 1 1/2 inches deep just above the height that your container will sit, sap should run immediately, if it doesn't and you're definitely not too early, drill a little deeper. 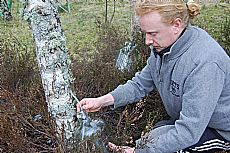 Insert the tube into the tree and container and cover the top will some foil to stop bugs getting in. 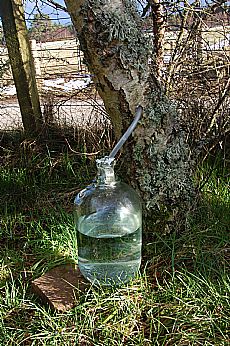 Sit back and relax, the next day you should have your sap. You can drink it straight away, very watery but good as a detoxifier. It doesn't keep for long though so I prefer to boil it down into syrup. 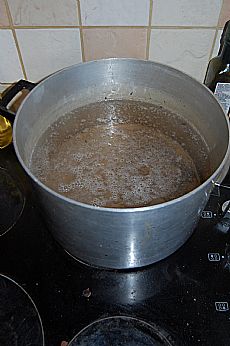 Simmer it until it goes golden and keep topping it up, it goes down to about a tenth before it gets really sweet. If you do it on an open fire it gets a nice smokey flavour too. 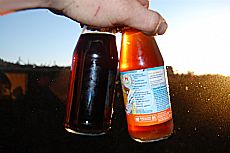 The syrup bottled, a light one and a more concentrated dark one. The more concentrated it is the longer it lasts, light stuff taints after a few weeks but really dark stuff lasts ages, I'm still using some from last year that's had a multitude of implements in it and lid off for days at a time and its fine.

Remember to plug up the holes you've drilled with 12 mm dowel when you're done and don't use the same tree next year, give them a break for a couple of years at least.

Its good on porridge, in tea or on ice cream among other things. 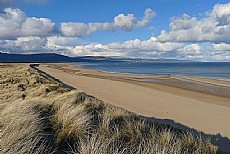