The first stage of the 10-stage John o’ Groats Trail from Inverness to John o’ Groats  passes from Ord Hill behind North Kessock, beside Loch Lundie and then down to the shore of Munlochy Bay before heading on to Culbokie for the end of Day1.   The route beside Munlochy Bay was conceived in 2015 to use a section of a Core Path of the Highland Core Path Network, but beside the bay the Core Path is waterlogged by both flooding by rainwater and from high tides.  So by 2017 a higher route was constructed to bypass the lower wet section below Bayhead.  After a year or so of operation, a footpath group that attracted members from across the Black Isle walked the route with pruners, loppers, secateurs and ensured it was safe and hazard-free to use.

Now forward to 2021 - after a period of lockdown the route was barely walked and vegetation reasserted itself, especially in the cut section above Munlochy Bay.  Julian and Mary Paren had tried to walk the section in July and gave up after fighting through gorse and brambles and long grass which hid the unevenness of the trail.

Julian sent out a call to the “footpath group” - an e-mail list of 35 people who had expressed an interest in maintaining footpaths, and ten days later, at short notice, 9 signed up for a fresh look at the section together with Jay Wilson, the originator of the entire John o’ Groats Trail.  Unexpectedly (or maybe just what you would expect) all in this group were members of Transition Black Isle.

The problem section was possibly 400 metres long.  The path was cleared from both sides and from low lying branches above, and on the ground by a final strim after the roots of gorse bushes had been cut right back to the ground.  The section also had a problematic stile which was singularly difficult to use as there was still barbed and chicken wire across it.  Fortunately an alternative route was seen to be possible, and was literally cut from scratch to follow the line of the fence which it crossed at a far easier point lower down.  The new route is drier than the previous route over the stile and provides a shorter section off the Core Path than hitherto.

The weather was fair and all found a role with the implements they brought.  Greatest thanks must go to Peter Moffatt for strimming the entire route after it had been opened up by those ahead of him.

At the end of activities, a photo was taken, home-made food shared, and Jay talked about the future of the Trail, highlighting that recent funding had allowed the employment of a Trail Manager, taking over some of the responsibility that Jay had taken on over the years. 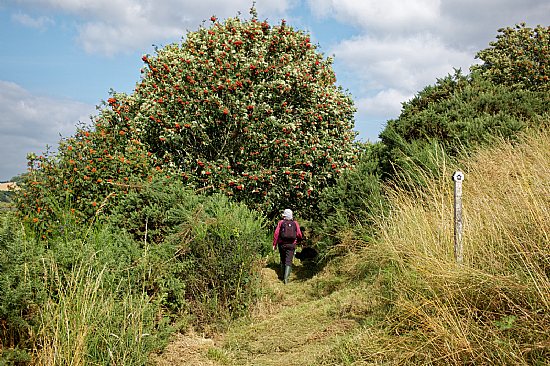 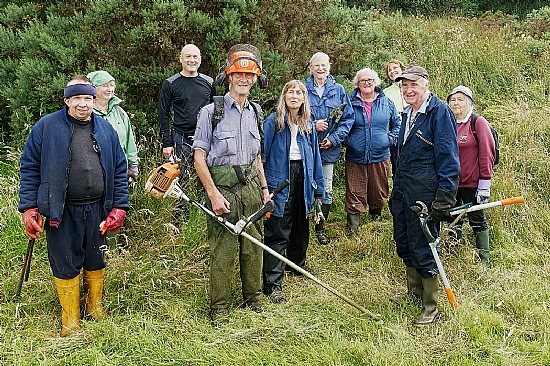