Some of Scotland’s youngest climate change protesters were invited to have their say at the Scottish Parliament. 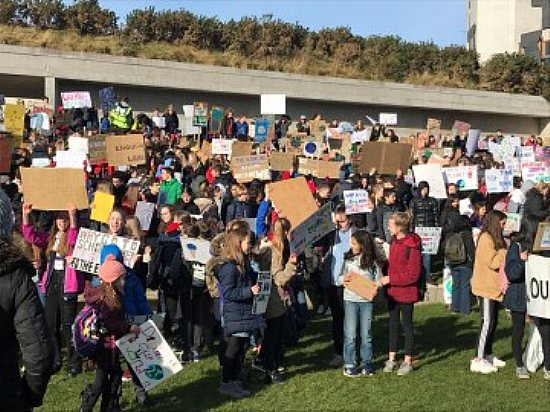 The Environment, Climate Change and Land Reform Committee heard from 13 young people, aged 7 to 17, to find out what motivated them to take part in the protest as well as what actions they think Scotland should take in order to stop climate change.

The young people, who came from across Scotland, took part in an informal meeting with the Committee on Tuesday 2 April 2019.

As well as meeting with members of the Committee, the young people also met the Intergovernmental Panel on Climate Change (IPCC), the United Nations body for assessing the science related to climate change.

The IPCC was visiting the Parliament to speak to the Committee about their work, the opportunities and challenges of tackling climate change and the Climate Change Bill being debated in the Parliament later that afternoon. Members of the IPCC met the young people before having discussion with the Committee.

Speaking ahead of the meeting, the Committee Convener, Gillian Martin MSP said:

“The passion and the commitment of the young people has been inspiring. The impact of climate change will affect their generation most, so it is understandable that they want to see change and they want to see it quickly.

“We are looking forward to meeting these young people to find out more about what inspired them to take part in this global movement and what they are doing to ensure that their voices are heard loud and clear.

“By having the opportunity to meet the IPCC at the Parliament, the young people will meet with those whose job it is to advise governments across the world on ways to mitigate climate change.

“There is no second chance with climate change, so it is vital we listen to all ideas for change and act on these in order to make a real difference.”

The meeting takes place on the same day as the Parliament will debate the Climate Change (Emissions Reduction Targets) (Scotland) Bill. In its Stage 1 report, the Committee called for greater urgency to stop global temperatures rising to dangerous levels.

Josie, aged 14, is one of the young people who attended. She said:

Following the meeting the Scottish Parliament considered the issues raised as part of its consideration of the Climate Change Bill.